I may have consumed more tolerated items than permitted today, but in all honesty, I'm not bothered! If I'm not going to lose weight this week or maybe even next, I'm going to at least make sure I get enough calories in. (I'm feeling a little despondant / sulky today!!! LOL) One thing I did notice though, is that I don't have as much control over myself around sweet things as I would like, although my chocolate muffins weren't sweet at all, I found myself getting that all consuming urge to eat them all, so although they were fantastic, I dont think I will be making them very often. Hopefully the bread will be easier to handle, less emotionally charged than my relationship with sweet things.

I've been keeping on with the peppermint/fennel tea and haven't drunk any carbonated drinks today, I must admit that my stomach feels a little better, thankfully. 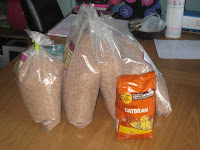 I sent Tim out yesterday to buy wheat bran. My oatbran comes in 800g bags (orange packaging) so he called and said the wheat bran comes in 750g bags, how many do you want me to get? I said, get 4, thinking they were going to be a similar size to the oatbran. He didnt mention they were huge things!!!!! Now I have 4 massive bags of the stuff!!!!! MEN.......... LOL. 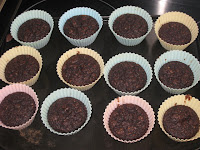 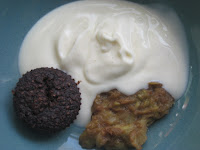 Shannons chocolate muffin recipe -  slightly tweaked - I obviously added wheatbran!!!!! HEHE. They didnt turn out sweet enough for my liking but I had them with f/f vanilla yoghurt and rhubarb, it was delicious. Thanks Shannon.

I will make your bread tomorrow!!! 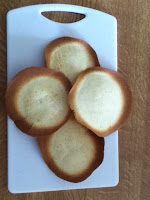 I made some onion crackers yesterday from the Dukanitout Website,
my oven was a little hot so they didnt turn out quite right, but they
were great, it was nice to have somthing that was crunchy & crisp
(other than raw veg!). I ate some today with my taco mince (Charlotte's recipe)
It was like eating chilli and nachos - MEGA YUM! :) 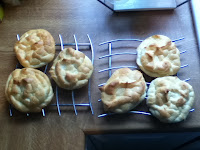 This is the picture of the soft buns I made from the same website a few weeks ago, they were nice, BUT, if I made them again I would make them smaller or cook them for longer, the insides weren't quite cooked enough for my liking based on their quoted cooking times.

Hope everyone else is having a great Dukan day xoxo
Posted by Do-Dukan at 20:39

Do-Dukan
Charting my weight loss journey from the beginning to a hopefully successful conclusion. Looking at potential issues and Dukan Diet updates.